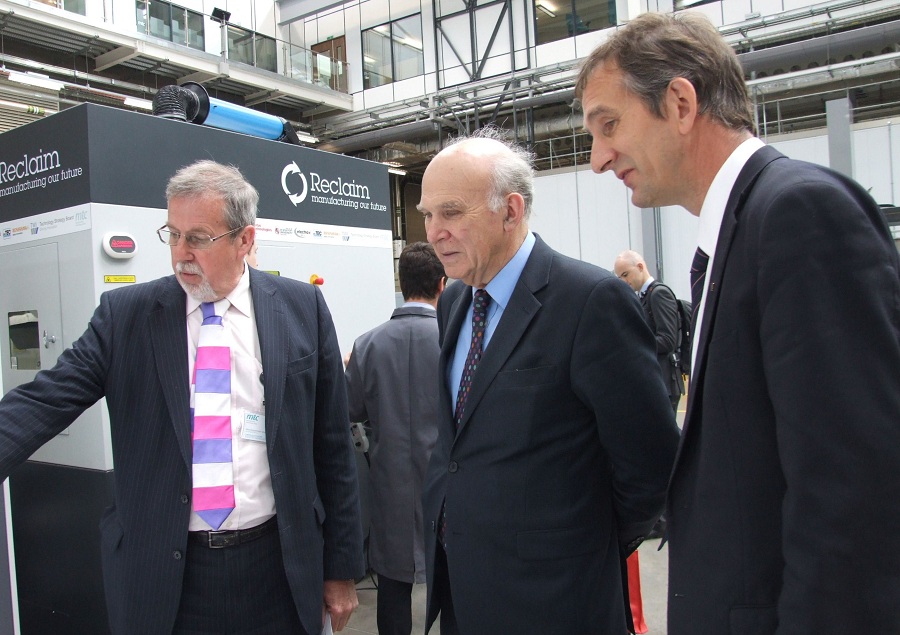 Business Secretary Vince Cable visited the £40 million Manufacturing Technology Centre in Coventry to see at first hand cutting edge projects which have the potential to save UK industry millions of pounds.

Dr Cable visited the MTC to meet representatives from 18 successful projects which have been selected to receive funding under the Technology Strategy Board initiative “Inspiring Design Freedoms in Additive Manufacturing and 3D Printing.”

While at the centre Dr Cable had the opportunity to see how some of the work already funded by the Technology Strategy Board is benefiting UK companies. The Secretary of State was shown work going on at the centre as part of the RECLAIM project, which has led to the development of a new hybrid manufacturing process using laser cladding, automated inspection and high speed machining in a single, fully integrated re-manufacturing cell.

The technology enables manufacturers to repair and recycle worn, high value components such as turbine blades to a consistently high quality. The innovation is expected to make a major contribution to the efficiency of the aerospace, defence and power industries in particular.

As well as repairing damaged and worn parts, the system can be used to manufacture totally new complex metal parts, upgrade obsolete parts and reconfigure standard parts for low volume applications. The new process is now being commercialised by a consortium of leading UK companies in partnership with key international end-users.

Vince Cable was shown around the centre by Manufacturing Technology Centre technology director Ken Young, who said the Business Secretary was impressed with the advanced and innovative work going on.

He said, “As well as the technology on show, we were able to emphasise that the MTC is already hitting targets from 2018 and 2020 business plans. In addition we have been able to recruit more than 160 employees in the last two years, while at the same time establishing a graduate recruitment and development programme and a fast-growing apprenticeship programme. Our growth in membership to the current level of 52 members is testament to our success, with major, international companies keen to work with our own engineers and our partner universities.”

The Manufacturing Technology Centre opened in 2011 following a £40 million investment. It is a partnership between some of the UK’s major global manufacturers and three forward-thinking universities: Birmingham, Nottingham and Loughborough as well as TWI Ltd, the operating division of The Welding Institute.

The MTC aims to provide a competitive environment to bridge the gap between university-based research and the development of innovative manufacturing solutions, in line with the Government’s manufacturing strategy. The MTC is part of the High Value Manufacturing Catapult which is supported by the Technology Strategy Board.

The areas of MTC’s technology focus are appropriate to both large and small companies and are applicable across industry sectors.