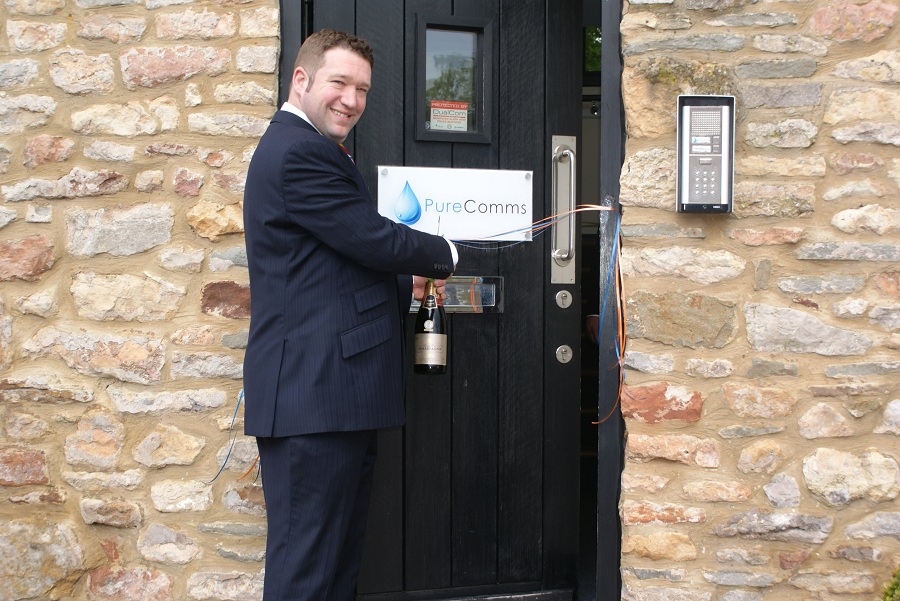 The official opening of a fast-growing firm’s new offices were celebrated in style with a BBQ, charity drive and high-profile visit.

Telecoms provider Pure Comms has taken 2400 Sq Ft of new office space at a converted barn on Tickenham Road in Clevedon, and Dr Liam Fox MP officially opened the new premises before a BBQ took place that was attended by media and business owners.

Money was also raised for Weston Hospicecare at the opening, with attendees able to donate to the charity; with the total sum match funded by Pure Comms.

Rob Vivian, who is Pure Comms’ Managing Director comments: “Running a business is hard work and there isn’t often much time to reflect on success; but all the tiny little increments of progress you make day to day culminate at milestones like these.

“We were very proud to welcome our local MP and many business owners from the region to celebrate the success we have achieved up to this point, and the official opening of our new offices. Personally it was a very proud day; and professionally the team here did a great job preparing for the opening.”

On opening the new office Dr Liam Fox MP comments: “I first visited Pure Comms in 2012 when they were based at Clevedon Hall. They’ve grown considerably in a short space of time and their new offices are fantastic; providing further space for growth.

“Rob has proved that despite the recession, businesses can thrive and grow. Pure Comms is a good example of an SME business getting it right and providing a first class, added value service. I look forward to visiting them again after their next quantum leap.”

The company was founded in 2009 with just Rob in the business, and currently employs nine staff.

Rob has plans to recruit at least three more staff by the end of the year and recently formed a new board of directors.

The company work with a number of high-profile businesses and organisations such as Bristol Airport, the UK’s leading independent fuel supplier BWOC, recruitment consultants Redrock and Opus and well-known auctioneers Bonhams.

Pure Comms were also crowned Business of the Year at the Sian Lloyd-Jones Business Awards in October 2012; and won re-seller of the year at an industry awards in December 2012.