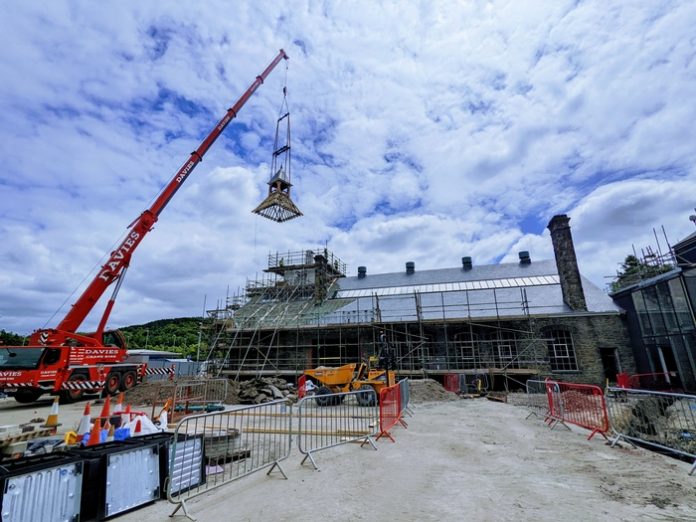 The new clock – on a tower overlooking the former Hafod-Morfa Copperworks – has been activated.

It’s a useful and attractive new addition to the Lower Swansea Valley landscape and will be seen by tens of thousands of people every week.

They include road users on the busy A4217, Swans and Ospreys fans heading to and from games at the Swansea.com Stadium and bus users at the Landore park and ride site.

The clock tower is on the copperworks’ former powerhouse building that – thanks to a Swansea Council regeneration scheme – will soon be an additional base for world-class Welsh drinks brand Penderyn.

The site is being revamped by Swansea firm John Weaver Contractors on behalf of the council.

Council leader Rob Stewart said: “It’s wonderful to see a new clock up and running on this very special old building – the tower will become an iconic new landmark for this site.

“People are already telling us how much they like the look of this structure that’s being brought back to life with such style.”

Council cabinet member Robert Francis-Davies said: “The clock is very much like the tower’s original clock – and this work shows how seriously we take protecting our heritage for future generations.

“It’s great to see the restoration of the historic copperworks site leading the regeneration of the Lower Tawe Valley.”

Clock fabricators were on site in the past few days to commission the clock.

“The restored clock tower is an unmissable symbol of the great strides made on the former copperworks sites in recent years; it epitomises the fine attention to detail that John Weavers have applied throughout.

“Hearing the clock chime for the first time was a huge moment, a heartbeat woken from a deep slumber. It reaffirms the sense that this globally important centre of industry lives again.

“Penderyn understand the deep sense of pride that Swansea has in its history and I couldn’t be happier that they’re safeguarding this landmark for generations to come.”

Penderyn Distillery chief operating officer Neil Quigley said: “This is a key moment in time not only for the historical Hafod-Morfa copperworks site but also for Penderyn Distillery. We’re delighted to see the clock tower in operation again and can’t wait to welcome visitors to the site, once our doors are open.”

Dr Alex Langlands, a senior lecturer in history and heritage at project partner Swansea University, said: “This beautifully refurbished clock tower on the powerhouse building is set once again to become an icon of the Lower Swansea Valley and a timely reminder of our proud industrial heritage.”

Joan Tamlyn, business development manager of Weavers, said: “We’re proud to be part of this prestigious heritage and regeneration project for Swansea; it highlights the city’s industrial past and will breathe new life into this area for future generations to enjoy.

“Our conservation team has taken great pride working on this project for the council and Penderyn.

“The clock tower is now looking magnificent and we can enjoy its beauty from our nearby head office.”

The highly visible clock tower was reinstated this summer.

Its restored powerhouse building and neighbouring structures will be an additional new home for Penderyn.

Work continues and the site will become a new visitor attraction for Penderyn next year.

The scheme will bring new life to the historic site. An on-site distillery will add to the company’s existing facilities.

The work has been made possible thanks to a £4m grant from The National Lottery Heritage Fund in Wales, and £500,000 from Welsh Government.

Construction at the copperworks began in summer 2020 as part of the city’s £1bn regeneration programme.

The Lower Swansea Valley became the world leading centre for copper smelting in the 18th century. The Hafod-Morfa site is of international importance, becoming the world’s largest copperworks in the latter part of the 19th century and early 20th century.

The council secured the National Lottery Heritage Fund grant for the expansive Hafod-Morfa site’s transformation work, with additional works to other historical buildings in the vicinity supported by Welsh Government Regeneration funding.

The council worked with partners – including Penderyn and Swansea University – to create the National Lottery Heritage Fund bid.