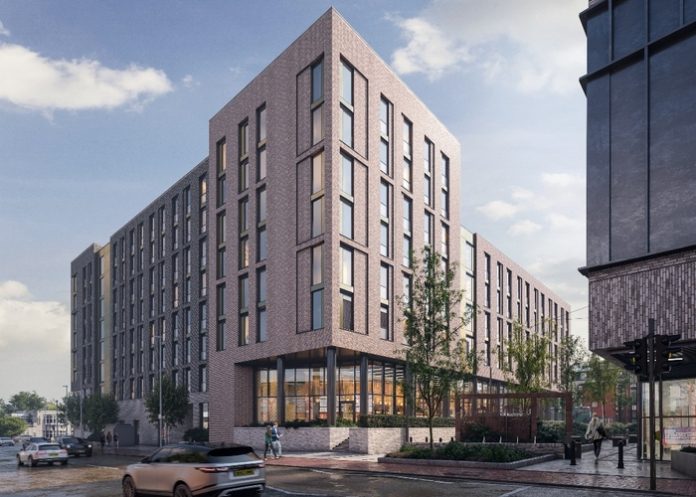 Officers at Broxtowe Borough Council have asked its planning committee to approve a mixed-use scheme of student accommodation and commercial space in Beeston.

The 419-student bed space scheme in Station Road, next to the Arc Cinema, was submitted for planning earlier this year. At the borough council’s planning committee on Wednesday (27.7.22), councillors will be asked to approve the scheme proposed by Midlands-based developer Cassidy Group.

Cassidy says that the scheme at the edge of Beeston town centre will breathe new life into a derelict site and will bring increased footfall and economic benefit to local retailers. It will also free up much-needed housing in the town, currently occupied by students, for family homes.

A council report agrees and recommends that councillors approve the scheme. The recommendation comes after months of deliberation by the council and an extensive public engagement exercise led by Cassidy. Council officers say in a planning report that they agree the student scheme will free up many of Beeston’s houses – particularly since a restriction in change of use from houses to HMOs (houses of multiple occupation) earlier this year.

The report states that the scheme would create a “significant boost of housing numbers when maintaining an adequate supply is becoming more challenging. The additional dwellings would also be on previously developed land that is not in green belt or otherwise protected, reducing pressure on land that is.”

The report adds: “The proposal would therefore be purpose built and could accommodate occupiers who could otherwise occupy C3 dwellings [houses, flats, apartments], to the detriment of the wider community, as this would represent the loss of accommodation that would be more suited to families and other longer-term residents.”

In the report, officers noted that while a part of the building rises to eight storeys and would be the tallest structure in Beeston, the development would take place on a prominent town centre site “considered to be capable of accommodating a building of the height proposed without detriment to the character of the area or neighbour amenity.”

The report also noted that the design and scale of the Station Road development would relate well to its town centre location and that the building’s tallest block would be of a comparable height to the cinema complex next door.

The planning report also touched on concerns by residents that the six parking spaces proposed as part of the development were insufficient.

But officers say in the report: “When considering there are regular public transport services and amenities within the immediate locality, and parking on surrounding roads controlled by Traffic Regulation order, it is not envisaged that any shortfall in parking would result in a highway safety issue.”

Cassidy has stated in its planning application that students would be prohibited to park on site and it would be made clear in tenancy agreements. Furthermore, Cassidy has committed to providing a free tram pass to all students for the entire duration of their occupancy. It will also provide on site bike storage for 114 bicycles.

Officers also stated that the scheme would boost local trade in terms of restaurants, leisure and retail.

The 34-page report concludes that “any potential concerns would be outweighed by the benefits of the scheme, which is considered to be in accordance with the policies contained within the development plan.”

Officers recommended that planning permission is granted subject to 26 conditions – including the provision of a detailed landscape and ecological management plan and that plans for community artwork features are provided.

As part of a list of contributions to the town, Cassidy has been asked to contribute towards local GP services in Beeston.

The Cassidy scheme is a few minutes’ walk from the University of Nottingham campus and is on the tram route. The scheme is situated next to new exciting bars and restaurants such as Ottimo and the forthcoming Beeston Social.

Sam Rose, of Cassidy Group, said: “We are excited to bring this student scheme to Beeston. Not only will students love living there – so close to the amenities they enjoy, as well as their university campus – but we are bringing a derelict site back to life.

“We feel the scheme fits well with the fantastic Beeston town centre that is emerging as a busy and exciting place to be, both day and night. We know from our research that Beeston is becoming a more desirable place for families and students to live.

“By creating sensitively designed student schemes with fabulous interiors like the one we are proposing for Beeston, we know we can not only create something that benefits the local area – but also an additional student environment where people really want to live.”

Cassidy says the scheme will rely heavily on local transport. It will provide limited parking – allowing only for deliveries and disabled parking – because of the variety of public transport access through bus, tram, and pedestrian routes. It is just a few minutes’ walk from Beeston Railway Station.

Businessman Ross Considine, who owns the nearby Ottimo, said: “I am sure I speak for a number of retailers and bar-restaurant owners when I say that I would welcome this scheme with open arms.

“We opened our third bar-restaurant in Beeston because we could see what an amazing, lively town centre it is. In our first few weeks of opening, we have had great feedback – and have also welcomed students. This scheme will further boost local shops and restaurants and of course local transport. Student footfall boosts local economies, and the student spend is worth tens of thousands of pounds a year for Beeston – and that must not be forgotten. We want the town to continue to be the bustling, lively and exciting place it is.”