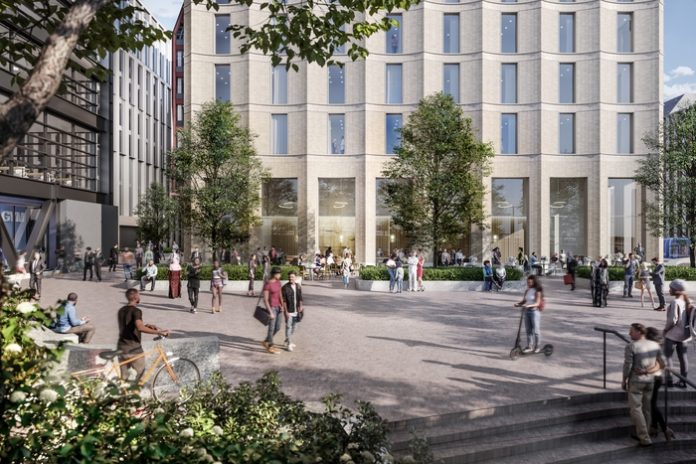 Planning permission has been granted by Birmingham City Council for a new landmark hotel at Paradise Birmingham.

The plans are part of Phase Two of the £700 million redevelopment of the heart of the city.

Located on the corner of Paradise Street and Suffolk Street, the new 17 storey, 152 bedroom hotel, has been designed through a collaboration between hotel experts ISA Architecture & Design and Paradise masterplanners Glenn Howells Architects (GHA).

The two practices have created a statement building with class leading amenities, including a roof-top sky bar, that will add a different, high quality offer to the city’s hospitality market.

The hotel is also the cornerstone of the second phase of the Paradise development, which includes new commercial buildings, public realm and new pedestrian connections for the city.

Future public realm work is planned for a series of new public squares and pedestrian routes through the development, including the new Ratcliff Passage alongside the Town Hall which will also interact with the Town Hall tram stop, and Ratcliff Square alongside the hotel leading down to Easy Row.

As an important contributor to regional growth, Paradise is committed to creating high quality workplaces for the future and new pedestrian squares and streets linking the city centre, for everyone who experiences the city to enjoy.

Rob Groves, regional development director with Paradise development manager MEPC, said: ‘The planning permission for the hotel means we can now move forward towards completing this next phase of the development which is already impacting the legibility and connectivity of the city centre.

‘With One Centenary Way, Octagon and further landmark buildings coming forward, we’re continuing to bring new cutting edge buildings to Birmingham, creating new jobs, skills and opportunities for the city and region. The plans to complete Phase Two will continue to develop and underline our overall approach.’

Dav Bansal, Partner, Glenn Howells Architects, said: ‘In collaboration with ISA Architecture, we are delighted to reach this major milestone with planning approval for a new boutique hotel at Paradise. The hotel adds another dimension to this mixed-use destination and extends the civic quality that has already been delivered in Phase One in and around Chamberlain Square.

‘Forming the southern edge of the masterplan, this ‘crafted corner piece’ will be crowned by a sky bar which will deliver panoramic views from the terrace and bring a fluted silhouette to the city’s skyline.’

Ian Springford, of ISA Architecture & Design, said: ‘Moving forward with the hotel is a major win for Paradise and the people of Birmingham. This hotel will set new standards for city centre amenity and quality and forms an essential and fitting part of the Paradise masterplan.

‘It will quickly become a central part of the region’s hospitality offer and bring something new and different to the city’s prime hotel market where a bespoke, luxury destination has been missing.’

Planning and development consultancy Turley worked with the design team and MEPC on delivering the planning applications for Phase Two.

PwC, the leading professional services firm, moved its 2,000-strong team to One Chamberlain Square in January 2020 and has been joined at Paradise by DLA Piper which has taken occupation of the top two floors of Two Chamberlain Square with Knights, Mazars and Atkins also in the building, while Arup has committed to taking three floors of the new One Centenary Way building, currently under construction.

At almost 2 million square feet, Paradise is delivering up to ten new flagship buildings, offering offices, shops, bars, cafés, restaurants, a high-quality hotel and Octagon, a 49 storey residential tower, across 17 acres in the heart of the city.

The Paradise redevelopment is being brought forward through Paradise Circus Limited Partnership (PCLP), a private-public joint venture with Birmingham City Council. The private sector funding is being managed by the international business of Federated Hermes, which has partnered with Canada Pension Plan Investment Board (CPP Investments) on the first phase of the development and for One Centenary Way, the 280,000 sq ft first part of Phase Two. MEPC is the development manager. 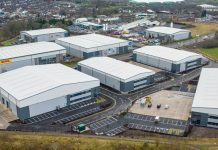 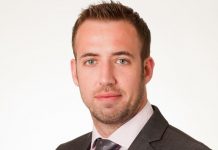