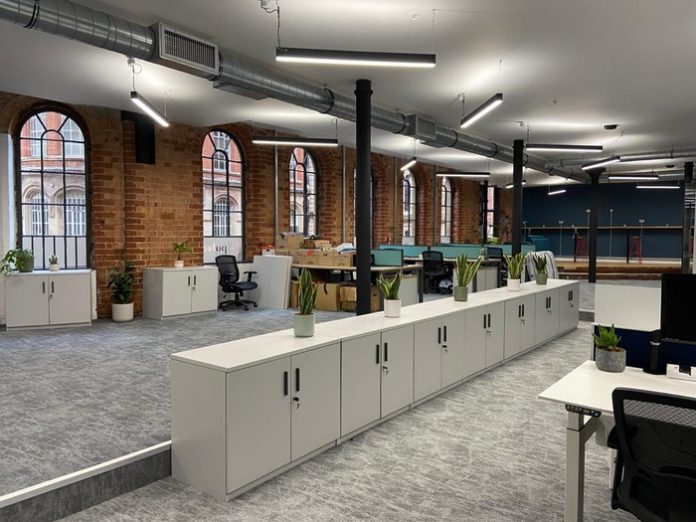 The Lace Market’s beautiful buildings have been proud witnesses to Nottingham’s manufacturing and commercial past, from its lace-making days to its role at the heart of the city’s famous clubland. Now this vibrant area is home to a growing number of businesses looking for offices with a difference.

Creating a new bespoke office space in a grand Lace Market building can have its challenges, with the need to respect each property’s heritage at the top of the priority list.

And from discovering newspapers from the 1870s tucked into floorboards and peeling away years of window boardings in former nightclubs, office design expert Dan Belfield has seen it all.

One of his latest challenges saw his firm, B&M Installations, creating the new Nottingham headquarters for leading consultancy firm Pulse Consult in the former Propaganda nightclub in The Birkin Building in Broadway.

The popular after-party destination was a staple of Nottingham’s clubbing scene for more than a decade until its owners, ‘with a very heavy heart’, announced a permanent closure in May 2020, due to economic conditions.

Clubbers with longer memories may also recall its heyday as The Monastery and Skin. Other popular nightspots in Broadway included Beatroot, Spectrum and Evasion.

“It really was an essential destination back in the day and people still talk about their nights out there,” said Dan. “But it’s testament to the draw of the buildings with their interesting backgrounds, features and quirks that people are now looking to move their businesses into these places.”

Among the quirks in the Pulse Consult project was the discovery of a stained glass medieval-style window installed when the premises was The Monastery in the late 90s.

“We were checking behind a curved wall, to ensure that everything complied with fire regulations, when we found this arched window, which the new tenants wanted to keep,” said Dan. “We have tried to retain many of the features and to enhance them.”

Dan’s team works closely with client Victoria Green, who runs Spenbeck, the award-winning provider of bespoke commercial creative space, with her sister Becky. Their firm is leasing the offices to Pulse Consult.

“It’s exciting to find things like that and Victoria and Becky love to discover the history of a place,” said Dan. “There aren’t many buildings in Nottingham where you can lift a floorboard up and find a newspaper from 1870 – but in The Birkin Building you do.

“People love the features such as the beautiful brickwork and the fact that nothing is straight and square. They want to keep the history alive while adding their own touches.

“I’m passionate about the buildings too. There are skills needed in understanding what you’re allowed to do with Grade II listed buildings and we have meetings with English Heritage to discuss our projects.”

The brief for the 350 sq metre space for Pulse Consult included keeping the raised floor sections, creating a meeting room and a prayer room in the former kitchen area – and a break-out zone where the club once had a dance pole.

Dan added: “A high-level booth area has been enhanced and made slightly bigger which is now the boardroom and we also configured the toilet areas – one set was kept and the other was recreated as an open plan office. It’s a great working space now.”

His company, which works across a range of sectors, including universities and schools, had previously refurbished the office space upstairs, the former Faces and Broadway nightclubs.

Victoria explained: “It’s a massive job to turn these places from dark clubs into light, airy offices while also retaining the character of the space.

“It was really exciting to be part of the Pulse Consult project. We worked with Dan on the upstairs offices, so we know what to expect, as much as anyone can in a Grade II listed building and in a nightclub that’s not been touched for more than 30 years.

“These clubs appear all black and dark until you start peeling back the layers of wallpaper and coverings – you never really know what you’ll find underneath.”

The Birkin Building, built in 1855 to the designs of distinguished Victorian architect Thomas Chambers Hind, was the international headquarters of lace manufacturers Birkin and Co. It is considered to be one of the most significant sites in the city’s industrial and architectural heritage.

Victoria and her sister are building on the work of their father, Mich Stevenson, who has been at the forefront of preserving and regenerating The Lace Market, bringing listed buildings back to life whilst meeting modern business needs.

“These buildings are full of character and history and we are their custodians,” said Victoria.

Office needs are changing as a result of the pandemic, resulting in Zoom areas and quiet zones, she added. “People are very focused on the quality of office space they are looking for and listening to their staff. These days it needs to be a social space where people come to work rather than simply a workspace.”

Pulse Consult has around 20 staff in Nottingham – previously based near the Contemporary – and offers consultancy services including project managing, quantity surveying and development monitoring.

Senior consultant Olly Steele, in charge of planning and projects control, said the company had been delighted with the transformation.

“As soon as we saw this space it seemed perfect for us and our plans to develop and grow the business,” he said. “We could see the potential, even if it was in a bit of a sorry state – the windows were boarded up and it was quite dark and moody.

“The fact that it was a former nightclub definitely appealed to us and seemed quite fitting. We’re a very social bunch and we feel right at the heart of the action here among these stunning Lace Market buildings.

“We were heavily involved in the design and wanted to keep many of the characteristics. It is now really light and airy. Dan and the team did everything we asked of them and they were a pleasure to work with.

“The space now has the Pulse DNA running through it. We love it so much that we’re planning to use it as a template for future office openings.”

B&M Installations has a number of projects in the pipeline for 2022, with the commercial office market looking buoyant, said Dan. “People still need a working hub, even if that is for a couple of days a week, and especially those in creative businesses where you can’t beat face-to-face interaction.”