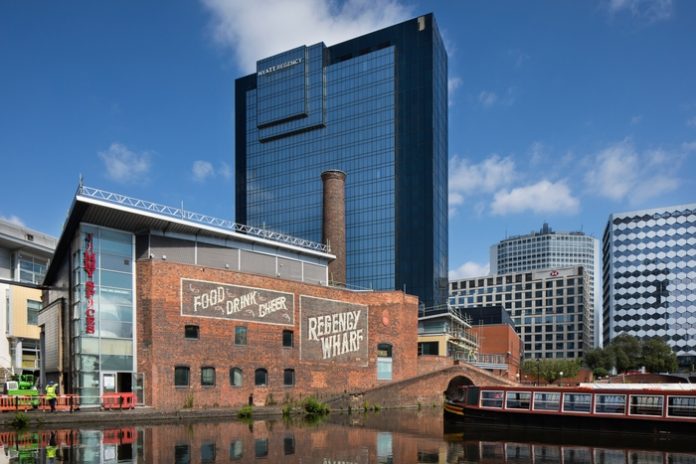 Midlands-based interior design consultancy Office Principles has been chosen to deliver a Grade A office conversion on the site of a legendary former nightclub in Birmingham city centre.

The consultancy will design and refurbish more than 16,000 sq ft of space at the two-storey Rum Runner Works building in Regency Wharf, on behalf of landlord Picton Property Income.

Spaces will be characterised by large floor to ceiling heights, including a double height reception area, with full access raised floors. Partition walls will be removed on the top floor of the building to create an open mezzanine with an internal balustrade.

The frontage of the building will be sandblasted to expose the original brickwork and illuminated signage will be installed in a nod to the site’s heritage.

The unique, self-contained building can be let as a single 16,180 sq ft headquarters building or as flexible office suites ranging in size from 3,741 sq ft.

Founded in the 1960s, the Rum Runner was made famous as Duran Duran’s resident gig and rehearsal venue during the New Romantic years. There were live gigs at the original club and it also offered free rehearsal space to Dexy’s Midnight Runners and UB40. The building was demolished in 1987 to make way for the Hyatt Hotel.

The current Rum Runner Works building was most recently home to global buffet restaurant, Jimmy Spices, which has relocated to brand new premises in an adjacent building also owned by Picton.

Gary Tailby, managing director of Office Principles North, said: “Rum Runner Works is part of a site with a fabulous history and we’re excited by the challenge of bringing the building back to life as a unique office space. Our design will restore the building’s personality and maximise many of its original features, as well as adding new external areas for occupants to enjoy the canalside surroundings. We’ll also be installing a new lift, stairs and reception area without extending the existing structure, which makes this a cost effective project that will add significant value to the building.”

Theo Holmes, Director at CBRE, who is the leasing agent said: “Rum Runner is one of the most striking office schemes to come to the market in recent years. Its setting, combined with the level of onsite amenity, is truly unique in the market. Offering a mix of new and old will really appeal plus with the new metro line running outside the scheme means it has never been better connected.”