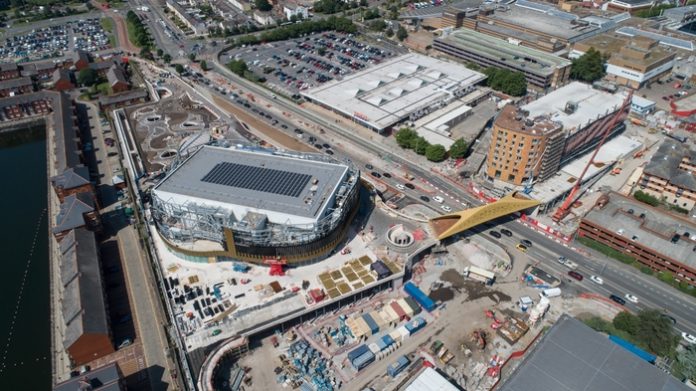 The dramatic film captures the curved walkways and landscaped areas of the new coastal park now taking shape – this will sit on top of a two-storey car park.

Also seen are the growing numbers of gold-coloured aluminium panels which, inset with more than 90,000 LEDS, will form the arena’s outer skin.

The Copr Bay bridge is also clearly visible crossing Oystermouth Road – and alongside it is the tower that will have homes by social landlord Pobl and hospitality-focused businesses. Next to this is a large multi-storey car park currently being fitted with eye-catching fin cladding.

Last week we revealed that the parkland’s café-restaurant – shown in the film to be under construction – is to be run by Swansea hospitality specialists Ryan and Lucy Hole who already run successful Swansea businesses such as The Secret.

“The transformation under way in and around our city centre will create and maintain jobs here as Swansea leads Wales out of the pandemic.”

The emerging £135 million Copr Bay phase one district is being developed by Swansea Council and advised by development manager RivingtonHark.

Construction, being led by Buckingham Group Contracting Limited, is earmarked for completion this year.

The council is financing Copr Bay phase one, with some funding for the arena coming from the Swansea Bay City Deal. The landmark bridge forming part of the scheme is part-funded by the Welsh Government’s Active Travel fund.