White-collar workers in Greater London, the West Midlands and the South-West are most likely to think a return to the office will improve their career opportunities, according to a study by Tristan Capital Partners and Sterling Property Ventures.

More than 2,500 office workers were polled across 12 UK regions and 17 cities, with the results show that, on average, 60 per cent of respondents believed a return to their desks could increase their chances of seeing a pay rise, promotion, appointment to lead a project or building closer relationships with senior staff.

In London, 67 per cent felt their career would benefit. This was slightly above the 64 per cent in the West Midlands and 64 per cent in the South-West. In contrast, under half (49 per cent) of South-East respondents outside London believed their careers would benefit, according to the research by Sterling, which is delivering 103 Colmore Row in Birmingham in partnership with Tristan Capital Partners – the tallest office building under construction outside London.

Office workers in Newcastle were the least concerned, where fewer than half (48 per cent) of respondents said they felt that a return to the office would boost their career opportunities.

Despite being the most eager to return to the office to increase their career opportunities, Londoners also come out on top for time spent commuting. The poll reveals that the average amount of time office workers across Greater London spend travelling into the office is 42 minutes. However, more than a fifth (22 per cent) of commuters in the capital say their travel time will come in at over an hour. Nationally, an average of just 14 per cent of office workers reported their commutes last an hour or longer.

By comparison, in the West Midlands, office workers in and around Birmingham spend 31 minutes travelling to the workplace on average – less than the overall national average of 34 minutes – with just 13 per cent facing a commute of an hour or longer.

When asked to rate their work-life balance, Birmingham came out top, with more than three-quarters (78 per cent) saying they are content – above the national average of 73 per cent. This compared with 76 per cent in Southampton and 75 per cent in Bristol.

James Howarth, Managing Director of Sterling Property Ventures, commented: “The debate about a return to the office has mostly centred on personal preference and the convenience of working from home. However, this needs to be contrasted with career progression, opportunities to create and collaborate and work-life balance. Our research shows that these are important elements too and we don’t want to see office workers missing out on opportunities.”

The research also suggests that a failure by employers to act on substandard office space could result in a loss of talent to rival firms. In London, for example, 85 per cent of respondents said that the quality of a potential new employer’s office would be an important factor in them deciding to take the job or not. The capital was narrowly followed by Birmingham, where 83 per cent believed the same.

James added: “In cities such as Birmingham, which historically has been constrained by a shortage of high-quality offices and shared space compared with London, the demand for new working models and higher-quality offices, will become even more pronounced over the coming years, and we believe that 103 Colmore Row is well positioned to meet that demand.” 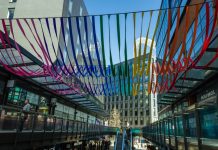