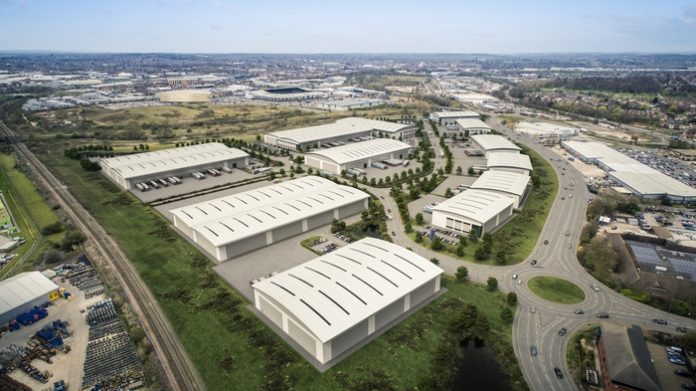 The developer’s submission includes plans for three high-quality business units of 39,000 sq ft, 54,000 sq ft and 79,000 sq ft which, if approved, could bring around 300 jobs to the immediate area.

Formerly known as Chaddesden Triangle, St. Modwen’s plans for its new Derby scheme are testament to its track record in developing a high-quality portfolio of industrial and logistics schemes, following the launch of its dedicated Industrial & Logistics business unit in 2019.

St. Modwen Park Derby, which is a joint venture between the Birmingham-based developer and Network Rail, comprises 70-acres of brownfield land and is located on Wyvern Way, adjacent to Pride Park.

Following the recent completion of the A52 Wyvern Transport Improvement Scheme, St. Modwen Park Derby will give future occupiers prime access to Derby city centre, as well as the A50 and Junction 25 of the M1.

Outline consent for 780,000 sq ft of industrial and distribution space was granted by Derby City Council last year and, in line with the developer’s key ethos of delivering quality places to work and to promote health and wellbeing for park and building users, St. Modwen has further refined its masterplan to include a fitness trail and wildlife corridor along the River Derwent.

Rob Richardson, Senior Development Manager at St. Modwen Industrial & Logistics, said: “Together with Network Rail, we are committed to delivering a prime business park and a wealth of job opportunities for Derby and we look forward to bringing forward such a well-located scheme, which will meet the City and wider region’s demand for high-quality industrial and logistics space. We are pleased to have had the support of the local authority who believe in the site’s potential and the boost it could give to the East Midlands’ economy.”

Gary Walsh, Managing Director for Network Rail in the East Midlands, added: “This development is great news for Derby and the surrounding area, and we’re pleased to be involved with St. Modwen. This land has been sat empty for some time so it’s really positive that not only will the land now be used, but the development will support the local economy and provide much needed new jobs.”

Joint agents for the site are Innes England and the Birmingham office of Savills.

Nick Hosking, Director at Innes England, added: “It’s massively encouraging for the City to see such a key employment site coming forward. The scheme, which can accommodate requirements up to 300,000 sq ft, will undoubtedly provide a very attractive option for industrial and logistics businesses in the region, given its immediate access to the national motorway network, and with Derby city centre just a five-minute drive away.”

Ranjit Gill, Head of Industrial Agency at Savills, added: “St. Modwen’s track record of delivery of well-designed, versatile, mid-sized units will help satisfy the acute shortage of this type of space in Derby and we are pleased to already be in conversations with a number of interested companies.” 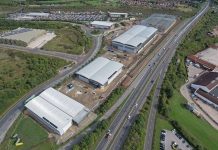